Coffee
Cakes
Pastries
Café Nervosa is a location on NBC series Frasier. It is located in Seattle, Washington.

Aside from Frasier's apartment and the KACL booth, the single most used locale must be this bijou dispenser of every form of caffeinated beverage known to man. Café Nervosa is Frasier's refuge whenever his father's chair frays his last nerve, or Eddie snarfs his last waffle. Gertrude Moon even works here for a while, to universal dismay.

Maureen Nervosa (portrayed by Amy Hill)
the owner and founder of Café Nervosa who is seen only once when Ben, a loud folk singer plays live at the café. She is only seen in Farewell, Nervosa where Frasier and Niles get kicked out of the café.
Eric (portrayed by Dean Erickson)
a ginger-haired barista working at Café Nervosa during the first season. He wore his hair long and was the frontman for a garage band and briefly dated Daphne Moon before dumping her for another girl. He is also seen in You Can't Tell A Crook By His Cover serving Frasier and Niles coffee.

Waitress (portrayed by Luck Hari)
she is the most recurring waitress at the Cafe, and has served Frasier and Niles from 1994 to 1997

Rick Garrett (portrayed by Todd Babcock)
worked at Café Nervosa while in college, he had a fling with Roz Doyle and she got pregnant. He leaves for Paris and is never seen or heard of again.

Colette (portrayed by Tricia O'Kelley)
she makes her first and only appearance in Season 6 Episode 9 "Roz, A Loan. She has a habit if eavesdropping on other people's conversations and butting in, she foretells bad news with an annoying groan.

Thad (portrayed by TBA)
a tall and imposing man who consistently gets Niles' order wrong.

Kit (portrayed by Jessica Cauffiel)
a bubbly blonde waitress, who took spinning lessons in the same class as Roz and briefly dated Niles.

Steve (portrayed by Kevin Daniels)
He originally worked at a different cafe, but he promptly quits upon seeing Frasier and Niles enter the Nervosa.

James (portrayed by James Oliver)
a somewhat indifferent or emotionless barista at Café Nervosa and is described by Frasier as being "unflappable". 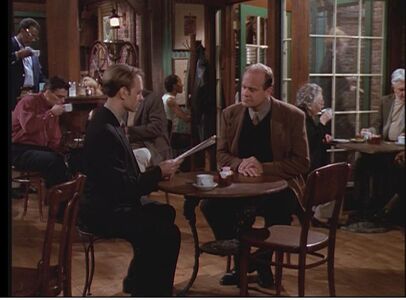 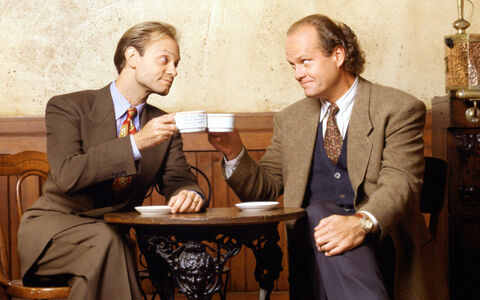