257
Daphne Moon is a principal character on Frasier. She is portrayed by Jane Leeves.

As the series begins, Daphne is a recent immigrant from England who is employed by Frasier Crane as a live-in housekeeper and physical therapist for his father, Martin Crane. Her quirky personality and claims of psychic abilities provided comic relief on the show, while her relationship with Frasier's brother Niles Crane was a major dramatic plotline during the run of the series, progressing from Niles' secret infatuation at the beginning of the show to their marriage at the beginning of season ten.

Daphne is hired by Frasier Crane to assist Frasier's father, Martin Crane, with his daily activities and exercises. Martin suffers pain and discomfort from a bullet wound he received two years prior working on the Seattle police force.[1] Incidentally, Daphne, prior to being hired by the Cranes, had a chance encounter with them at Café Nervosa.[2]

Daphne was born in Manchester, England, the only daughter in a large, working-class family of nine children.[3] Daphne spent much of her childhood playing nurse and housemaid to her brothers. She has a complex love-hate relationship with her domineering and ever-complaining mother, Gertrude Moon; her relationship with her father, Harry Moon, is much warmer and closer.

When Daphne was 12 to 16 years old, she starred as Emma in a hit British sitcom called "Mind Your Knickers" (about "ethnically diverse" twelve-year-olds in a girls' private boarding school). Her sojourn ended when she became too tall and busty to play her short, pre-teen character.[4]

During her youth, she gained considerable skill at billiards, claiming to have won many tournaments.[5] After working at a convenience store (which she implies was robbed), Daphne then took up a career as a physical therapist, working one-on-one with clients. At an indeterminate time, Daphne migrates across the Atlantic to live in Seattle, seeking a new life free of her domineering family.

Like most characters on Frasier, Daphne has many eccentricities. She often tells rambling stories about her family, cheerfully remembering rather grim or traumatic events, to the considerable discomfort of the Crane family. She is also a firm believer in the supernatural, and is "a bit psychic". Daphne's apparent psychic abilities are often treated with ambiguity on the show, and her various 'visions' are sometimes shown to have come true -- often in a somewhat roundabout way, sometimes very accurately. She is a kind, caring person, but also incredibly tough.

Martin is instantly taken with Daphne's down-to-earth, at times brusque manner, which contrasts with Frasier and Niles' personalities. While Daphne appears somewhat oblivious to the bliss of having escaped her difficult family and speaks of them lovingly mostly, she and Martin take well to one another and Daphne, with her strong and rough character, provides an equal to Martin. This balance aides in bringing together the ailing father and son in Frasier's home and they frequently mention how they can't imagine living together without Daphne there as well. 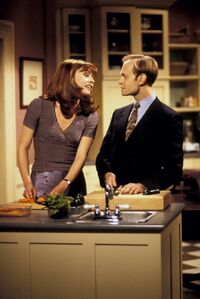 Daphne's most significant developing relationship over the course of the series is with Frasier Crane's younger brother, Niles Crane. Unbeknownst to Daphne, Niles falls in love with her at first sight. Despite the increasing obviousness of Niles' infatuation, Daphne remains utterly oblivious to Niles' feelings towards her, though they become increasingly close friends. Niles says nothing to Daphne, at first because he is married, later because she is involved with numerous (frequently unsuccessful) relationships with other men. Even when she is not, Niles can't work up the courage to tell her how he feels.

Niles' feelings are ultimately, and accidentally, revealed by Frasier who lets the secret slip under the influence of strong muscle relaxers while Daphne is giving him a back massage.[6] Shocked to discover Niles' true feelings towards her, Daphne finds herself falling in love with Niles in return[7][8], placing her in the position Niles had been in for many years - in love with someone unaware of her true feelings. Heartbroken to discover that he had, on impulse, married his girlfriend Mel[9], Daphne intends to go ahead with her own marriage to Niles' divorce lawyer, Donny, until Frasier intervenes. Niles finally confesses his feelings to her, and although she initially rejects him, saying she should go through with her promise, Daphne eventually changes her mind, abandoning Donny at the altar.[10]

The guilt she suffers as a result, and the difficulties in Daphne and Niles' new relationship, cause Daphne to begin overeating (a previous episode established her as eating junk food when upset, causing her family to believe she's pregnant). She gains sixty pounds, but Niles is so blinded by love he doesn't notice until Daphne falls to the floor and is too heavy to get up without the help of Frasier, Niles and Martin (who remarks "it took three Cranes to lift you").

Daphne later becomes a U.S. citizen and she and Niles marry in a small, private ceremony in Reno, Nevada. Daphne and Niles adjust to their new life as a wedded couple and have their first child, David, as Frasier prepares to start his life anew in Chicago.[11]

Daphne grew up in a very large, dysfunctional family. Although frequently mentioned, the first time one of her family members appears on the show is when Donny surprises Daphne with a visit from her brother, Simon Moon (Anthony LaPaglia), not knowing that she dislikes him[12] (her favorite brother, Stephen Moon, never appears until the final episode, where he is played by Richard E. Grant). Daphne's mother Gertrude first visits for Daphne's wedding to Donny[10], while her father Harry Moon visits Seattle two years later. Roz mentions Daphne's Aunt Ida.[10]

Many of Daphne's eight brothers have appeared on the show; unfortunately, few of them maintained consistency with Daphne's Northern accent. Anthony LaPaglia, an Australian actor, faked a Cockney (London) accent, while Robbie Coltrane, who is Scottish, played Daphne's brother Michael Moon with a muddled Brummy (Birmingham) accent. Most of the brothers are portrayed as lawless, alcoholic ne'er-do-wells and womanizers, except for Billy Moon, who is implied to be gay, such as when Daphne says 'All of my brothers would peek at me in the shower, all of them! Except for Billy that is'.[13]

When Daphne talks with her mom Gertrude about resuming her sex life with Niles after his heart surgery, Gertrude tells her to "use her feminine wiles, that’s how your brother Billy landed Kevin." Despite her brothers' obvious faults, she is the one repeatedly criticized by her mother, while her older brothers are viewed through rose-colored glasses.

The names of Daphne's brothers: