Sheldon Epps
Hot Pursuit is the 18th episode of Season 7 of Frasier.

LOOKING FOR ROMANTIC FLINGS, ODD COUPLE FRASIER AND ROZ POOL THEIR RESOURCES -- Frasier (Kelsey Grammer) and Roz (Peri Gilpin) head for a broadcasting convention that's a notorious haven for lusty partygoers, and while each tries to pair off with someone else, Frasier must ultimately bunk with her when his room in cancelled—and the unlikely couple find they have more in common than they ever knew. Back at home, Martin (John Mahoney) gladly accepts lawyer Donny's (guest star Saul Rubinek) lucrative offer to stake out a philandering husband at night, but before he can snap any photos, a worried Niles (David Hyde Pierce) crashes his secret surveillance scene.

Immediately after coming home from visiting Fredrick in Boston, Frasier learns from Roz that a broadcast conference will be having its reception on the same day. Having thought it would be the following week, Frasier wants to stay home, rest for the night and attend the panels the next day. However, because the first night typically turns into a wild party, Roz convinces him to come along right away. Meanwhile, Donny wants to hire Martin to do surveillance on a husband suspected of being unfaithful for a divorce case he's handling. Martin is appealed by the $50 an hour wage and the $700 bonus if he takes a photo of the husband with his mistress, but Niles, concerned for his safety, wants him to turn it down. Martin pretends to agree, but accepts the job when Niles leaves.

At the conference, Frasier and Roz both look forward to hitting the dating scene, but Frasier finds out that there has been a trouble with the booking, forcing him to share a room with Roz. They go down to the festivities, but strike out. When the hotel gives them a bottle of champagne as an apology for the booking mistake, they open it and start talking about their respective love lives. When they discuss what their longest relationships with the opposite sex have been, Frasier at first says Lilith, but then points out that he has been with Roz even longer, even though they are just friends. When Roz compliments Frasier on a beard he has been growing, she also shows up in a blonde wig, wanting to try out the hair color. They start playfully roleplaying as other people and come close to having a very intimate moment, but then Kenny shows up at the door, having been stuck in the storm outside and being unable to get a room himself. When he starts joking about Frasier and Roz being alone in a romantic setting, they back away from their previous encounter.

Meanwhile, Martin goes on the stakeout, where he is confronted by Niles, who heard where he was going from the doorman. Niles insists on staying and Martin thinks it's because Niles thinks he's too old to be doing it, but Niles clarifies that he is actually worried about him, stemming from his time as a police office, when he was always worried that Martin may not come home. Martin understands since his father was also a cop, but remarks that he isn't chasing criminals, just taking a photo. Niles agrees and tries to leave, but Martin asks him to stay behind and enjoy the time together. Later, Niles asks Martin if he's doing the right thing and points out that taking the photo will ruin the husband's chances of making amends in the future. Martin pretends not to care, but doesn't take the photo.

Frasier tries to get more comfortable sharing a bed with Kenny, accidentally removing his snore strips in the process, but fails. 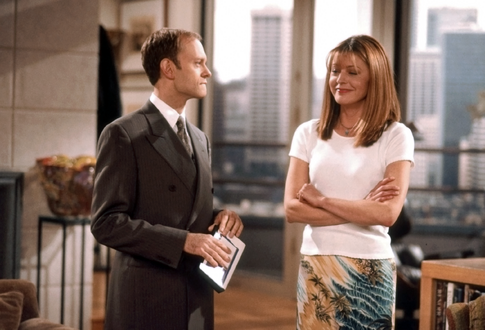 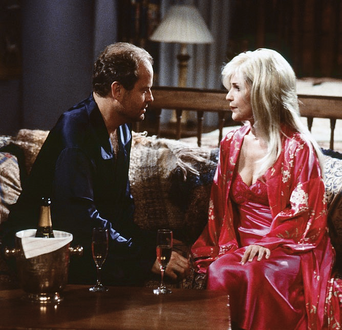