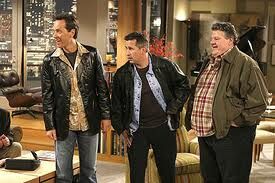 Michael Moon is a one-shot character on Frasier. He appears in the series finale "Goodnight, Seattle" along with his brothers Stephen and Simon. His speaks very quickly, and it is very incomprehensible. When he was little, he was often bowled across the ice-covered lake, until one time he broke through the ice. He lost a toe from this incident, but his mother assured him that the "Toe Fairy" would exchange it for money if he placed it under his pillow. He is assumed to be a fisherman and can operate a cannon. He is the brother of Daphne Moon, son of Harry Moon and Gertrude Moon. He is played by Robbie Coltrane (best known to younger viewers and their parents as Hagrid in the Harry Potter film series). His accent roams all over the British Isles during his brief screen time on Frasier.