It is possible to move a relationship along too fast and ultimately marry too hastily. You could find a few years down the line that the person isn't really right for you, and then what happens if you meet the right person, someone who REALLY EXCITES you and makes you feel ALIVE, but you can't ACT upon it because you're TRAPPED in a STALE, albeit comfortable MARIS -- marriage
—Niles

Niles Crane is a principal character on Frasier. He is portrayed by David Hyde Pierce.

Niles is fastidious, snooty and persnickety, and has gourmet tastes. He is also faithful, courteous and incredibly loving which more than makes it up in the eyes of his loved ones. He is, in the earlier seasons during his marriage to Maris. He likes and enjoys classical music, fine wine and French food which he himself cooks, and frequently obsesses about knowing the right people and climbing the social ladder. Niles is also extremely rational. Niles has a 156 IQ, well above the Mensa median (which is typically around the low 130s).[1]

Niles has a long list of phobias and medical conditions, many of which are clearly psychosomatic. Most prominently, he is quite mysophobic, given to wiping his hands after human contact and wiping down chairs in public places before sitting on them. He has nose bleeds when he tells a fib, and he faints at the sight of blood. When he gets stressed, he is prone to panic attacks and fits of hyperventilation which have, on more than one occasion, seen him lose consciousness. He also suffers from a long list of allergies, some of which are exceedingly rare.

He is seemingly hopeless at sports, barely able to catch objects even after simple throws. However, in some episodes he is shown to be fair at basketball. On one occasion, while attending a basketball game, he is fortuitously invited on court during the game's intermission to try his skill (or luck) at scoring from half court, and much to the astonishment of his brother and father (and himself), Niles makes the impossible throw. The brothers are often seen coming or going to squash matches, though Martin once commented in disbelief, "You have to wonder what happens on that squash court." Accompanying Martin on the shooting range one day, Niles discovered that he is an excellent marksman. He is a fair fencer, and has had some lessons in kickboxing, apparently being only two moves away from being "quite threatening". On other occasions he has expressed interest in lifting weights and taking karate lessons, but these ventures are typically laughed at by his father and brother and often amount to nothing. He is also a master speller, having come close to winning the national spelling competition as a youth.

Born in Seattle, Washington, in 1957, to Hester Crane, a psychiatrist, and Martin Crane, a police detective. Although the exact date of Niles' birth is never revealed, he's roughly two years younger than Frasier.

Like Frasier, Niles was named for one of his mother's lab rats.[2] Also like Frasier, Niles was a sensitive child when growing up, and a frequent target for bullies. As a result, he was quite close to his older brother, and at the same time fiercely competitive with him. Like Frasier, Niles also preferred fine arts, music, and intellectual pursuits to activities like sports, though he excels in sports like squash and croquet.

Niles' success in school led to his attendance at Yale University in New Haven, Connecticut (like his counterpart David Hyde Pierce) as an undergraduate, and the Yale School of Medicine for both his M.D. and Ph.D. in psychiatry. He subsequently attended the University of Cambridge in Cambridge, England, where he was a postdoctoral fellow while completing his professional training. This further highlights the close competitive relationship with his brother, Frasier, who attended Harvard University in Cambridge, Massachusetts as an undergraduate, then Harvard Medical School for both his M.D. and Ph.D. in psychiatry, subsequently followed by his own postdoctoral fellowship at the University of Oxford in Oxford, England.

Niles describes his profession as "the saving grace of my life"[1] and is greatly respected professionally. He runs his own Jungian practice (Frasier is a Freudian) and has had his research published in several psychiatric journals. Niles often compares his own career to that of his brother, and early in the series makes frequent wisecracks about the "pop psychiatry" that Frasier practices through his radio show. Over the course of the show his remarks dwindle to occasional jabs for the purpose of humor. It is revealed that Niles lashed out at his brother due to jealousy, as he felt that he did not receive the praise and recognition due for his hard work, whereas Frasier's face is seen on "the side of buses." This sibling conflict is one of the main ones explored in the series. Niles becomes a much more confident, laid-back person as time goes on. He develops a backbone after separating from his loveless marriage with Maris, and after losing his wealth, and his social circle, and his home. These experiences make him much more self sufficient and less obsessed with his image.

His romantic life – which is plagued by misfortune until marrying Daphne – is another area explored throughout the series.

Niles' first wife is the haughty, anorexic daughter of a wealthy Seattle family. She is never seen, despite being referred by Niles all the time during their relationship. Much like Niles, Maris has a long list of ailments and allergies, such as being allergic to most meats, spices, creams and more. She also has lots of pills and medication which usually have side effects such as extreme narcolepsy. Maris demonstrates her extremely paranoid and controlling nature throughout the series. Her lack of respect and affection for Niles ultimately leads to separation, which is followed by Maris serving Niles with divorce papers as a bluff. However, when Niles signs them, she is shaken enough to agree to couples counseling. However, after appearing to make progress, Niles discovers Maris is having an affair with their couples' therapist, Dr. Shenkman, ultimately leading to him making the second and final decision for divorce. Despite this, Maris still attempts to reconcile with Niles by sending him expensive gifts, but Niles remains steadfast in his decision for divorce and Maris responds by shredding their financial settlement document – she turns it into the wrapping paper for her final gift to Niles – a five-cent piece in a jeweller's box along with the poem 'Roses are red, your heart is fickle, when I'm through with you, all you'll have is this nickel' – and proceeds to nearly bankrupt Niles. As a result, Niles is forced to sublet his suite at the Montana and move into the low-rent Shangri-La, accepting that this is the price he must pay in order to finally be free from Maris. In season six, Niles hires divorce attorney Donny Douglas to bring an end to the long, drawn out process. In the end, Donny is able to get Maris and her legal team to agree to an incredible settlement (to the point Niles regained his old apartment, vehicle, and a lakeside cottage), after Donny learns that the origin of Maris' family wealth is not as it appears (Maris having told everyone, including Niles, that it came from lumber when it actually came from urinal cakes) allowing Niles and Donny to take advantage of the embarrassment it would cause her should Maris' elitist friends learn of it.

After divorcing Maris, Niles later becomes involved with Mel Karnofsky. Despite being more compatible with her than Maris, Mel turns out to be no different by being just as manipulative as she was. Despite Frasier warning Niles of Mel's true colors, Niles rebuffs him and continues to go out with her. Niles and Mel impulsively elope while out of town despite going out for less than six months. However, the marriage crumbles immediately when Niles and Daphne's feelings for each other finally collide.

Niles' most significant relationship during the series is with Daphne, his father's physical therapist, perhaps an unlikely attraction given the significant differences in their tastes, temperament and social standing (he at one point refers to her as a "working-class Venus"). His infatuation for her begins the moment they meet. Yet, for numerous reasons during the first six seasons of the show, Niles is unable to confess his feelings for Daphne, who remains unaware of his love for her (despite her professed psychic abilities).

When Niles finally confesses his feelings to Daphne the night before her wedding to Donny, Daphne reciprocates but tells Niles that they'd be better off with their current romantic partners (with both of them having made a serious commitment), Daphne changes her mind the next morning and abandons Donny at the altar, much to Niles' euphoria. The relationship spawns a huge ordeal, prompting Donny to respond by suing both Daphne and Frasier (which Donny later drops), while Mel forces Niles to participate in a prolonged charade of a happy marriage for the sake of appearances. Niles goes along with it until Mel shows up unannounced at a party hosted by Frasier at his apartment. This event finally pushes Niles over the edge and reveals the truth – that his marriage to Mel is a sham and he refuses to put Daphne through the torture of hiding their love any longer.[3]

Even with Mel out of the way, Niles and Daphne face yet another obstacle as Daphne gains sixty pounds, but Niles is so blinded by love he doesn't notice until Daphne falls to the floor and is too heavy to get up without the help of Frasier, Niles and Martin (who remarks "it took three Cranes to lift you"). The weight problem was written into the show to allow Leeves to continue working while pregnant. Daphne then left for several weeks to attend a health spa and returned with her figure restored. Her therapist at the spa tells her that she began over-eating to create distance between herself and Niles because she was afraid that she wouldn't be able to live up to Niles's lofty expectations after he spent the last seven years believing she was perfect. In the end, Niles and Daphne find compatibility, and many of Niles' nervous eccentricities diminish as he finally manages to maintain a stable relationship.

Niles and Daphne date for about one year before Niles proposes in the ninth season. At the end of the season, the two leave to elope in Reno, Nevada, after Niles' plan to reconcile Daphne's parents ends in failure. This left Daphne in doubt about married life, since her mother and father's marriage ended abruptly after 40 years together. However, Daphne's father reveals that no matter how many times he tried to get rid of Niles from his pub, Niles kept coming back until he finally agreed to come back to America with him all in an effort to make Daphne happy (something he never did for Daphne's mother). Realizing that Niles would go out of his way to try to make her most impposible dream come true, Daphne goes over to Niles' apartment in the spur of the moment and requests that they get married immediately. Niles accepts this request and he leads her out of the apartment without a word.

In the final season, Daphne reveals to Niles that she is pregnant with their first child. In series finale, their son, David, is born at a veterinary clinic on the same day Martin marries Ronee Lawrence. 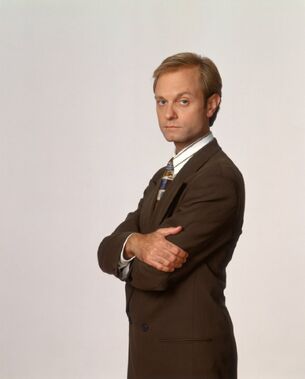 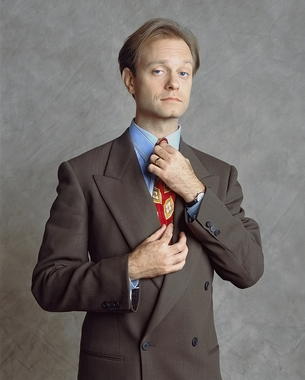 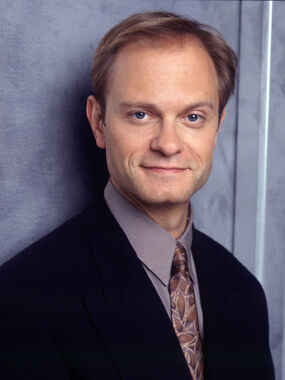