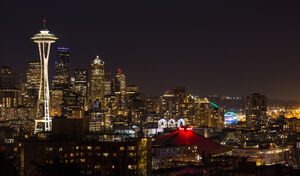 Seattle, Washington is the home city of Frasier Crane; the main characters live either in the city directly or within its limits. It is very much like the Seattle we know, and the real city held a genuine "Frasier Crane Appreciation Day" to mark the show's 100th episode.

It is acknowledged in the commentaries that the apparent view from Frasier's apartment, which takes in so many of the city's landmarks, is simply impossible in reality.